Thousands of jubilant Armenians have poured into Yerevan’s main square to celebrate the resignation of Prime Minister Serzh Sarkisian, who stepped down amid widespread street protests over his election to the newly powerful post following 10 years as president.

The Armenian Defense Ministry condemned what it said was their (soldiers)  illegal action, saying the men belonged to a brigade of military peacekeepers.

“The harshest legal measures will be taken against the soldiers,” it said in a statement.

“The street movement is against my tenure. I am fulfilling your demand,” he said in a statement.

The announcement came soon after opposition leader Nikol Pashinyan was released from detention. Mr Pashinyan had been arrested on Sunday after televised talks with Mr Sargsyan collapsed.

As well as Mr Pashinyan, two other opposition politicians and some 200 demonstrators were held.

His political opponents accused him of changing the country’s laws so he could hold on to power for another 10 years. In late 2015, the country’s government pushed through a controversial constitutional referendum that would downgrade the presidency to a mostly symbolic position and give increased power to the prime minister. Many observers said this change was designed to allow Sargsyan to transition from the presidency to the premiership when his legal term limit was reached. 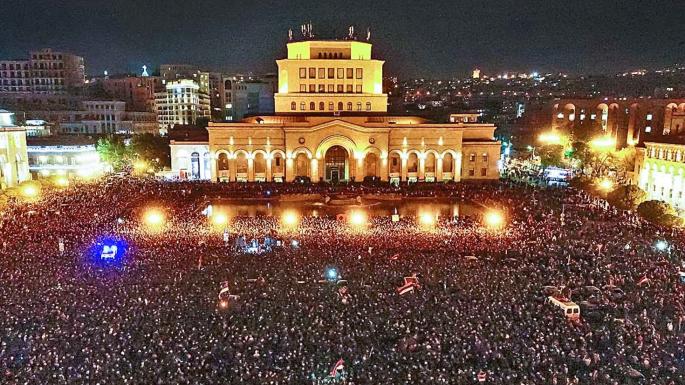 Sargsyan had always been a controversial figure. At least eight people died during clashes with police when he was elected to office in 2008. He won a second five-year term in 2013 after several political opponents suddenly resigned and one candidate was shot in what many said was an assassination attempt.

It followed years of frustration over social and economic issues, and ultimately the “four-day war” in April 2016 over the disputed Nagorno-Karabakh territory that caused dozens of casualties, bringing Armenia and Azerbaijan close to all-out conflict.

Observers drew parallels between Armenia’s so-called strongman and the Russian president, as well as Recep Tayyip Erdogan in Turkey. After completing his limit of two presidential terms, Vladimir Putin became prime minister of Russia in 2008 before returning to the presidency in 2012. Erdogan graduated from years as prime minister to become president, with beefed-up powers.

Sargsyan has a close relationship with Putin, which critics say has made Yerevan too tied to Moscow.

This entry was posted in Uncategorized and tagged armenia, Karapetyan, Sarkisian. Bookmark the permalink.